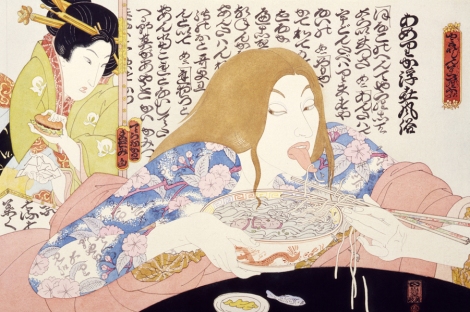 (I haven’t updated in a while, because I’ve been moving and trying to apply for jobs – and I’m sorry! When my life is a little more settled I will be more regular in my posts, I promise!)

I am not normally the biggest fan of art galleries and the like, but I am extremely grateful I was convinced to visit the NYC Japan Society’s current exhibition, where I discovered my favorite painting ever (see above).

The standard for art galleries and museums seems to be to organize everything chronologically, but one of the things that made this Japan Society gallery so amazing was the fact that it was organized thematically, with 300 year old paintings interspersed with diasporic paintings/photographs. The theme of the entire exhibition was something everyone can relate to: identity. There were paintings derived from theatre traditions, LGBT paintings dating back to the 16th century, and a ton of works by Japanese artists who were not ethnically Japanese and/or even born in Japan – something I appreciated a lot, as an Indian who is not ethnically Indian. For a taste of the theme of the exhibition, one installation, “Reprise” by Jimmy Robert, is about “identity and transitory movement”, “the ephemerality of life that was embraced in the culture of the floating world” (according to the placard placed nearby). If there is anyone alive in 2013 that these ideas do not speak to, I would be very surprised.

I am going to be entirely honest: the last place on earth I have had any desire to visit has always been Japan. I’ve just never been interested, but this gallery changed that. Take the above picture, by Masumi Teraoka: “McDonald’s Hamburgers Invading Japan/Geisha and Tattooed Woman”. The commentary on globalization in this picture is something that anyone in today’s world can appreciate, even people like me who know nothing about Japan other than where it is on a map and that it is the home of anime and sushi. The Japanese woman is with her hamburger, looking in utter confusion at the white woman slurping ramen. What in the world is she doing? Why doesn’t she just eat a burger? And just look at the white woman’s tongue, also! It’s just spectacular.

Something I think everyone can relate to in the 21st century is this identity confusion that we all have been experiencing because of globalization. I deal with this every day – for instance, I’m white, but a bindi is very much a part of my own cultural identity. How can I reconcile this with a world that is so concerned with cultural appropriation? This isn’t just happening in America and India, it’s in Japan and probably the rest of the world too. Seeing this painting, this entire exhibition, just re-emphasized to me how universal identity confusion is these days, which is why I recommend anyone in NYC goes to see this exhibition, today (or some other time before June 9). It’s free on Friday evenings, and will teach you things and make you feel a little more at home in this world where everyone is labeling everyone else and trying to figure out who the hell they are.