(Disclaimer: If you don’t want to know that the leads get together in the end, even though it’s obvious just from the trailer, you’ll consider this post to have too many spoilers.)

Hasee Toh Phasee can easily be seen as a typical Bollywood film, with a super attractive male lead who has to choose between two beautiful women who are fawning over him, and in the end everyone gets married and lives happily ever after. In reality, though, Nikhil is just a figurehead. The real hero of this film is Meeta, the strongest female character I have seen in a Hindi movie since 2012. Unlike what is portrayed in the trailer, the film isn’t about Nikhil’s choice between women, or about two crazy people falling in love; it’s about Meeta’s growth as a person from a hot mess into the amazing woman she is truly capable of being. 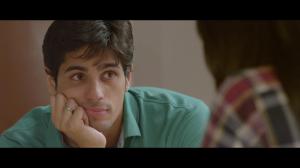 Have I mentioned there’s a super attractive male lead?

Meeta definitely isn’t strong in the sense of being a stereotypical “strong woman”. She is an escapist; she is an extremely intelligent woman who is cut down by society and her family at a young age, and who deals with this pressure in an objectively cowardly way. In the beginning of the film, “hasee toh phasee” is used somewhat crudely: Nikhil is flirting with a hot girl, she smiles at him, and his friends are like, “Damn she’s smiling at you, yaar! You’re totally about to get laid” (a rough translation of “hasee toh phasee”). By the end of the film, though, it becomes apparent that this was never the “hasee toh phasee” the title was referencing. Meeta is incredibly troubled and unhappy. She has her defenses up for most of the film, hiding from all her problems in life by putting on a dusera chehra. There are probably a few times she smiles before the end of the film, but the first time we see her truly happy is when she makes the decision to be with Nikhil and abandons her fears to run back into his arms. This is the “hasee toh phasee” the film is named after. If Nikhil can make a girl like that smile, he should probably marry her, because at this point neither of them are going to be happy with anyone else.

The trailer for Hasee Toh Phasee also makes it look like this is going to be another Bollywood film that makes a casual mental disorder out to be something that’s actually “cuckin’ frazy” (to quote their own description of it), a la Barfi/Dhoom 3. And it kind of is, for about 10 minutes.

Luckily, the clips in the trailer where Parineeti bugs out her eyes and bites her lip are pretty much all the clips of her doing this that occur in the entire movie. We find out fairly early on (but this could be kiiind of a spoiler) that the reason Meeta is considered “mental” is just that she pops pills every once in a while. This is why she is considered “mental”, “crazy”, and a “drug addict”: because she impulsively pops pills and runs away to deal with her anxiety. I mean, COME ON! Doesn’t everyone pop a xanny or two when they’re feeling anxious? Occasionally get sad and overdose on some oxy? No? Okay, never mind, maybe she’s a little mental. Even being high on anxiety meds doesn’t really warrant the ridiculous ticks in the trailer, but it’s okay. Maybe it wasn’t meant to show what the drugs do to her; Meeta was probably just putting on a show. She was returning to her hometown where everyone already thought she was insane anyway, so why not ham it up? Yeah, that’s what that was.

All the “this chick’s cray” nonsense is worth it, though, because of Nikhil’s relationship with Meeta. Nikhil thinks Meeta’s a little off, but he’s sort of intrigued by that. He’s not really pushed away by what everyone else has to say about her. Even when he finds out she’s a “drug addict”, he doesn’t try to degradingly “save” her, as if she’s some helpless object incapable of making her own decisions in life. He disagrees with her choices and he cares about her, and he makes that known. But he never once puts her down for it; he sees her as a HUMAN BEING, not defined solely by the choices she makes, or by her body, or by what society thinks, or by any of the countless other things women are so often judged by in our world. THIS IS FUCKING REVOLUTIONARY. I HAVE NEVER SEEN THIS IN A HINDI MOVIE IN MY LIFE. 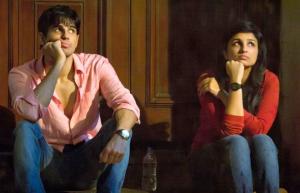 I swear they’re in love.

And, just to throw another spoiler in here, do you know what happens when he views this woman as a person? She stops taking pills to deal with her problems. Maybe she picks up the pill-popping again after that scene, but because someone loved her as a human being and brought her joy and didn’t instantly fucking judge her for things they didn’t understand about her life, she makes an active decision not to overdose to deal with her problems at the end of the movie. If you don’t think that moral is better than the “stalk a girl until she sleeps with you” trope of every Hindi movie that came out in 2013, then you should probably start overdosing on pills yourself because society doesn’t need you, asshole.

Other high points: Meeta’s casual but serious marriage proposal to Nikhil after only knowing him for three days (#ballsy), Sidharth Malhotra’s natural and honest acting (Parineeti is wonderful as always, but even she pales in comparison to how Sid wonderfully just IS Nikhil, in a way that is rare for Bollywood). Hasee Toh Phasee isn’t technically perfect, and I don’t recommend it to everyone. But if you want to see the strongest female character ever to exist in a Hindi movie, or if you can relate to the desire to just escape from all the pressures of society, you won’t be disappointed.

5 responses to “It’s Cuckin’ Frazy How Much I Loved Hasee Toh Phasee!!!”