There is a stigma around talking about certain subjects in India, resulting in a lack of public awareness surrounding many issues. Additionally, films are such a central part of Indian society that Bollywood stars are idolized and put on such a pedestal that they can get drunk and run over people with cars or play a role in a terrorist attack against their own country and get away with it. Aamir Khan has always realized his potential for influence as a star, as well as this lack of awareness, making movies that revolve around social issues, such as Taare Zameen Par and 3 Idiots. But in 2012, he took his potential for influence to a whole new level, starting his own television talk show on which he tackles the most taboo subjects within Indian society in the most politically correct and awareness-bringing way possible: Satyamev Jayate.

The approach taken by season one was pretty much perfect. Each episode is aired and available online with dubs in almost every Indian language, including an episode with English subtitles. They dub over guests who speak with too much English so that everyone in India is able to understand what they are saying, and the show and its discussions aren’t limited to this exclusive sphere of the upper class that so many things in India often are contained within. The format is perfect for it’s audience: introduce an issue by dispelling its most common misconceptions, bring on guests who can tell their own stories, bring on guests who are in a position of authority on the subject so can speak objectively about how awful the situation is, and then provide a reason for hope through a story of someone who has overcome the topic being discussed.

Despite Aamir Khan being a man and there being approximately zero women in the title sequence, the first season was remarkable in that it tackled a number of issues that were primarily women’s issues – things like domestic abuse, female foeticide, and dowry. This brought women’s rights into a whole new segment of Indian society, into an area where women could finally speak [almost] freely about issues that affect them. However, immediately following the conclusion of season one, it was made astonishingly clear that women in India were still, as the media has often portrayed it, “second class citizens”. In the summer of 2012, a woman was videotaped being gang-raped in Guwahati, and politicians and media were dismissive, saying the girl was asking for it by wearing a skirt. Then, in December 2012, there was the now-famous Nirbhaya case, where a woman, who was conservatively dressed and accompanied by a male companion, was gang-raped on a bus so violently that after the incident she was literally left on the streets to die. As many saw it, this was a new low for the state of women in India, and things had to change.

After a few months of protests, Nirbhaya died in a hospital in Singapore and everyone went back to their way of living. Seeing this complacency and the success of season one, Aamir Khan opened season two this year with an episode about the current most talked about women’s issue in India: rape. This was an incredibly politically intelligent decision, and the discussion that progressed throughout the episode was so perfectly politically correct that everyone should be voting for Aamir Khan for Prime Minister. He is incredibly articulate, is incredible at explaining an issue to people who would otherwise have absolutely no understanding of it, and even the now-predictable cut to an Aamir Khan close-up with a single tear forming in his eye as his guest recounts the most tragic part of their story is, in many ways, flawless. 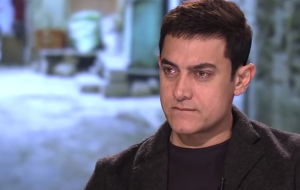 Unfortunately, though, when it comes to an issue like rape, the “politically correct” route isn’t necessarily best. Yes, this episode was great for reigniting a discussion on a topic that needs to be regularly discussed if it is going to ever be overcome. However, this topic was really well-covered already two years ago, and unlike in most of season one, the audience didn’t learn much they didn’t already know. By now, all of Indian society is pretty clear on the major points Aamir addressed: rape is bad when it is so violent that it kills people, and the rapists are the ones who should be dishonored instead of their victims. When it comes to rape, the issue isn’t a lack of awareness about the violent types of rape Aamir was talking about. It is a lack of awareness about rape as an issue of power, about patriarchal culture/feminism, and about the ways in which a person can promote this culture subconsciously through their speech.

The problem that needs to be tackled now is that patriarchal culture is so embedded in society that most people aren’t even aware of when they are promoting it. We can talk about women’s rights all we want, but the prevalent attitude right now is still to approach someone who just experienced sexual assault with an optimistic “just learn from this experience so that it doesn’t happen again.” After someone watches this episode, the only thing I can see changing in their conversation with a victim is going to be an attitude of “you’re lucky this is all that happened; be more careful so that next time you don’t die like those girls on Aamir’s show.”

Throughout the course of this episode, it was evident that no matter how eloquently Aamir is speaking about this, even he still has a bit of this rape culture so deeply ingrained in his ideology that he doesn’t even notice it is there. When Aamir says, “from birth, women are worried this will happen to them and men are worried this will happen to their mothers, wives, sisters, etc,” he is still promoting this dichotomy where men think about women’s issues as “women’s issues” – as something separate that doesn’t affect them, only the “other”. Even the literal Hindi translation of “she was raped” is “unke SATH balatkar kiya”: rape is not something done to a woman, it is something a woman and a man do together (“ke sath”). This problem runs so deeply in society that victim-blaming is literally in the language. And to stop something like that, it’s going to take a lot more than one episode of a politically correct television show.

11 responses to “Satyamev Jayate: on rape and the start of season 2”