Like every other kid growing up in the ’90’s, Jurassic Park pretty much defined my childhood. I haven’t seen the original movie since I used to watch it on repeat until the VHS broke when I was 4, but without Jurassic Park releasing almost exactly when I started forming memories, I doubt I would have been the dinosaur-obsessed toddler with dreams of becoming a paleontologist that I was.

In this respect, Jurassic World was an amazing tribute. I’m already obsessed with amusement parks as it is (my last birthday was spent riding a rollercoaster in the front row at exactly midnight and it was the best day of my life so far), so in the first 30 mins I was ready to sacrifice my life to visit Jurassic World. They made this place seem like Heaven on Earth. You can ride a triceratops! And raft down a river while brontosauruses just chill right over your head! My rafting trip underneath real live orangutans (the other best day of my life) now seems totally lame in comparison, despite being the most awesome thing that has ever happened to me. My only Hollywood aspiration is now going back in time and being on the team that made this movie, because whatever background research they did – which I assume consisted entirely of traveling to amusement park/zoos (I’m looking at you Busch Gardens, aka the best park currently in existence) while also learning about dinosaurs – seems like the best gig EVER.

The other reason I want to go back in time and be a part of this film, however, is because it clearly needed more females on its production team. Don’t get me wrong – I actually think this was one of the most well-directed films I’ve ever seen as it is – but the adult human characters needed a lot of work (only the adult humans; the dinosaurs and the 16 year old boy were so perfect). The central issue in the female lead’s life is that she is too obsessed with her work to want a family. HOW DARE SHE NOT WANT TO ENDURE 9 MONTHS OF A PARASITE GROWING INSIDE OF HER ONLY TO HAVE TO DEAL WITH THE LITTLE BEAST FOR THE ENTIRE REST OF ITS LIFE?? Who the fuck does this woman think she is, putting her career before family?

She has like one “badass” moment to Chris Pratt’s 5 million, and we’re supposed to think that moment’s enough. It’s not.

To be honest, I think the film would have been SO MUCH more interesting if the genders of the leads were reversed. I get that they were trying to fight stereotypes by making a woman the CEO and a man the motherly animal trainer, but it didn’t work. Most people in leadership positions at powerful corporations simply are men, and I’m willing to bet that there are more women than male ex-Navy Seals working as animal trainers. Because the idea of a female CEO is so unfamiliar to us, the genders being cast as they were just made the female character look like a bitch who needed a loving penis to infiltrate her vagina and calm her ass down. It would have been more predictable to have a male CEO who needs to learn to care about his family playing alongside a motherly female animal trainer, which would have made it that more unpredictable when the female ended up saving the day and being the badass who was able to stand her ground alongside LITERAL KILLING MACHINES. 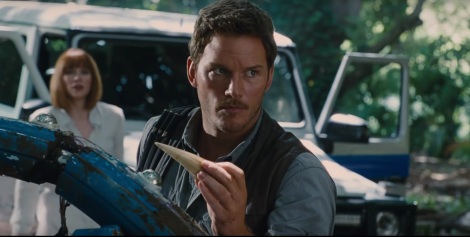 Aside from the gender balance, the rest of the casting seemed very… tokenized. There was the token desi guy, Irrfan Khan, who acted terribly and was clearly just put there to make sure the film became a hit in India, because otherwise Irrfan in that role served zero purpose. There was the token black guy, who was probably just there for the African audience, and the token Asian scientist just to have SOMEONE there from the first film. On top of that, there was a surprising dearth of Latino characters given that the film is set in fucking COSTA RICA. You’d think there would be at least one Spanish-speaking person present in the film? A native groundskeeper couldn’t have been that hard to write into the script.

Jurassic World, you did a FANTASTIC job of making me feel conflicted about whether or not I want to live in a world where your theme park actually exists – but I should feel conflicted about it because of the “hanging out with dinosaurs vs definite eventual death” conflict, and not because I love the idea of a triceratops petting zoo but don’t love the idea of replacing the stick up my vagina with a person’s dick.

2 responses to “Jurassic World? More Like A Man’s World”